My family loves having Pie for breakfast, be it a cherry pie or a Cinnamon Roll Apple Pie. Since we are in the middle of the apple picking season at home, we have been enjoying apple pies for several weeks now.

Last week, my daughter had gone with her cousins to pick apples for the first time. She brought us some very nice ones and kindly asked me to make her a delicious Apple pie.

Let’s just say that it’s my favorite dessert as well. So, I was not going to deny her this delight. I was missing the cinnamon roll apple pie that I have been making for years now and which is still a big hit with Christmas dinners.

Apple pies have been a kind of staple in our household, my husband loves making his special apple pie with butter. My mother-in-law always brings her favorite Dutch apple pie whenever she comes to visit.

So, my daughter’s request was nothing unusual. But I was confused as to which one should I make. Everyone in my family has their favorites, and I could not make all of them.

So, this time I opted for the cinnamon roll apple pie, a real treat that the entire family loved.

How to Choose Apples for Making an Apple Pie?

When it comes to apples, this pie has quite a lot. So, you need to choose only the premium quality apples. You need apples that do not turn mushy and ruin your pie while in the oven.

You do not need apples that are too sweet either because they would ruin the taste as well.

For years avid pie lovers have been advocating for the use of Granny Smith apples for pies. Why? Well, they have a very firm texture and they do not turn into gooey mush after baking or cooking.

But in my opinion, you need to use them with other apples because they lack flavor.

If like us, your family loves eating apple pies every other week, then Braeburn is a perfect choice for you. Their texture and citrusy aroma would make you fall in love with them.

They are unique in the sense that you get a flavor of pear in your pie. Mix them with other apples to get unique flavors.

As the name indicates, these apples are sweet and crispy. Your pie will have a proper structure and layers if you use these apples. Their flavor is also very delicious and scrumptious.

Their golden skin makes it easier to find in the farmer’s market. The sweet and tart flavor offers a perfect balance to the flavor profile of your pie. Their only flaw is lack of firmness, so your pie can be a little gooey after baking.

Though these are a little difficult to find, their crispy tangy flavor makes them perfect for a pie.

Now, for my cinnamon roll pie, I used the golden delicious apples as they were the ones that were collected by my daughter.

These apples are perfect for cinnamon roll pie but if you are making any other pie then I would urge you to buy Jonathan apples or honey crisps.

Let us move on to the recipe now.

Recipe for Filling of this delicious pie

This is the most important and crucial part of making apple pie. The apples that you are using must be soft, as the taste of your recipe mainly depends on how apples are treated.

For this purpose, you need to soften your apples first. You can use a saucepan for this purpose. Take apples and flour in the saucepan. Add sugar, cinnamon, and lemon juice to it. Cook it on medium flame.

Apples will start softening after ten to fifteen minutes. Keep stirring the apples. If you don’t stir them, sugar will burn on the bottom of the saucepan.

If you want to create a delicious apple pie, pay proper attention to this step. Wait until a syrup-like mixture is created. Make sure your apple pie mixture doesn’t contain any crunchy or hard materials.

If I would be asked to give you a piece of advice about preparing crusts that would be, “Keep all the ingredients cool.” Cold ingredients help us to make a flakier crust.

The good crust will make your Cinnamon roll crispy and crunchy to eat. Get pie dough, and mix it up. Sprinkle flour on the surface where you are planning to place the rolled-out dough. Roll out the dough in the shape of a rectangle.

The dough should not be too much thick, or too thin. Spread butter over the rolled-out dough. Sprinkle cinnamon and sugar on this dough.

Start rolling it just as you are making rolls. Start rolling from the longer end. Roll it as tightly as possible. After the dough is rolled, cut it into pieces.

For this purpose, you can use a pastry cutter or a sharp knife. Make sure that the edges of these pieces are sealed together.

Now comes the process of assembling the cinnamon roll apple pie. First of all, take some pieces and press them on the pie plate. Press some of them at the bottom, and some of them along the sides of the plate. Don’t leave spaces among these pieces.

Overlap them with each other. When the crust is prepared, fill it with the warm apple pie that we’ve cooked in the first step.

Make sure the apple pie is flattened and balanced and is not placed like a heap. Spread some butter over the pie, just like dots.

Place the remaining pieces of cinnamon roll over the apple pie. Make sure you are placing them in a nice pattern, as this will be how your pie appears?

This apple pie will take almost 40 minutes to cook. Bake this at 425 degrees Fahrenheit. If the edges are getting overcooked, you can also place foil paper around the edges of the pie.

How to Reserve Cinnamon Roll Apple Pie for Later Use?

You can reserve your apple pie by freezing it. There are two ways of freezing an apple pie. You can either freeze it after baking it or before baking it. If you want to freeze apple pie, here are some instructions that might be helpful to you.

How to choose the Best Ingredients for Cinnamon Roll Apple Pie?

If you want to make a delicious apple pie, pay attention to the ingredients that you select. Here are some ideal choices for these ingredients.

Use an ice cream flavor that you like, though my family prefers vanilla. You can purchase ice cream, or you can also make ice cream at home.

You only need to place a scoop of ice cream over the piece of apple pie cinnamon roll, before serving it. The ice cream starts melting and gets mixed with the apple pie, as it melts down.

You just have to press the cinnamon roll pieces in muffin cups just as we did in the pie plate. Fill each cup with apple pie, and bake them for 15 to 20 minutes.

Wait until they turn light brown. You can sprinkle cinnamon on each cup after they are done, to give it a mouth-watering look.

You can also use vanilla ice cream for topping. However, caramel sauce is one of the best options for giving apple pie cinnamon rolls a finishing look.

These apple pie cinnamon rolls are very easy to cook, and they are very delicious to eat. You can easily cook them, and freeze them for later use.

If you want to make a serving for fewer people, you can also make cinnamon roll apple pie cups. This recipe easily molds according to your requirements.

If you liked this recipe, give it a try. If it turns out good, do leave a comment. I am looking forward to your positive response. 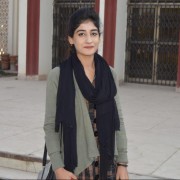 Fiza Arooj is a food blogger who wants to share her experience with food with you. Her mission is to bring accessible baking recipes into your home kitchen with beautiful photography! Check Also
Close
Follow Us
By Fiza Arooj
Facebook Twitter WhatsApp Telegram Viber
Back to top button
Close
Close
We use cookies to ensure that we give you the best experience on our website. If you continue to use this site we will assume that you are happy with it.Accept